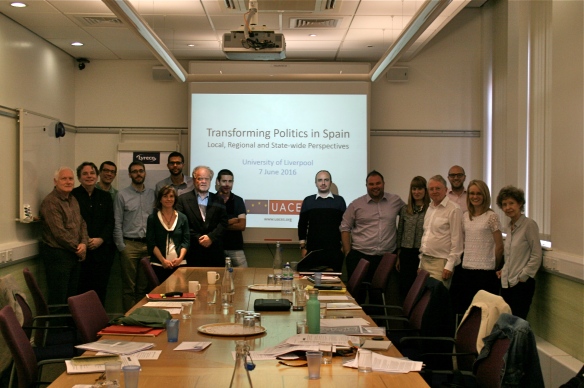 This one-day workshop, sponsored by UACES, Liverpool University’s Europe and the World Centre, and Aberystwyth University’s Department of International Politics, brought together scholars and practitioners from the UK and Spain to examine the transformation of politics in Spain in recent years. This has seen many established political parties lose electoral support and government office, and the growth of new and previously marginal political actors advocating a radically different way of doing and talking about politics.

A series of roundtable discussions focused on the role of three key drivers of political change: the economic crisis, a territorial crisis as a result of the Catalan challenge to the integrity of the Spanish state, and a political crisis characterised by widespread disillusionment with existing political institutions and actors. Contributors to the first roundtable, Economic Crisis and Political Transformation, outlined the particular features of the economic crisis in Spain (influenced by the specificities of the country’s economic model), and the nature of political responses to it. The discussion reflected on the extent to which European intervention in the Spanish economy has affected the fiscal autonomy of local, regional and central governments, and influenced popular attitudes towards the European project.

The second roundtable, Old and New Party Politics in Spain, examined the drivers and consequences of shifting patterns of party competition in Spain. An analysis of public opinion data provided insights into the demographic, generational, social and territorial trends in voter behaviour that have led to a shift from two-party to increasingly multi-party politics. This provided the context for focusing in more detail on the electoral fortunes and political prospects of old and new political parties. Contributors presented new research on the Spanish Socialists, the anti-austerity Podemos, and Barcelona en Comú which is transforming politics in this Catalan city.

Challenging Spain’s Territorial Model was the theme of the third roundtable. The Catalan secessionist process was a key theme here, and an analysis of state-wide party responses to this challenge to the central state highlighted the lack of a serious or consensus alternative to independence demands. But it was also argued that the issue of Catalan independence is only the most recent symptom of a much more profound and long-standing crisis of Spain’s model for managing territorial relations. The new research presented pointed to the growing disparity between territorial interests and behaviours within Spain, with the implication that solutions for reforming the current territorial model are unlikely to satisfy all, or even most, territorial actors.

The workshop concluded with a session on Academics, Political Engagement and the Future Research Agenda. A new study of the role of academics in the 2015 Spanish general election highlighted the opportunities and risks for scholars keen to engage with popular political debate. The discussion led to a broader reflection on the key research challenges for scholars of Spanish politics, and the identification of possible areas for future research collaboration. A priority is to understand the complex inter-relationship between economic, social, territorial and political drivers of Spain’s current transformation. This requires an ambitious multi-disciplinary and multi-scalar approach, and the workshop provided an excellent starting point for mapping out such a new project.