Richard Gillespie and Caroline Gray are pleased to report widespread participation in their project by experts and practitioners identified with the Catalan and Basque political processes, and would like to thank all contributors for their willingness and time.

Richard and Caroline’s ongoing fieldwork activities have so far resulted in dozens of interviews with parliamentarians, party representatives and veterans, civil society activists, and economic and financial experts. 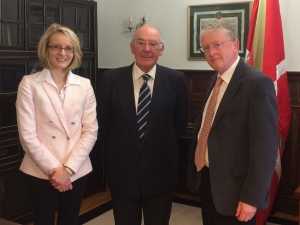 While most political participants to date have been from nationalist parties and coalitions (the PNV, EA and Bildu in the Basque Country; CiU, ERC, CUP and Reagrupament in Catalonia), interviews have also taken place with a wider range of party representatives, including parties on the right (PP) and on the left (PSC-PSOE, ICV). It is hoped to gain access eventually to all parties that have played influential roles in Basque and Catalan political life over the last quarter-century to reflect the broad spectrum across the party systems. 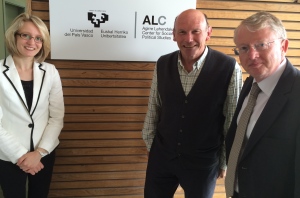 Some of those who have kindly agreed to take part in the project thus far have been involved in political life at the highest levels. They have included the former Catalan presidents Jordi Pujol and José Montilla, former Catalan vice-president Josep-Lluís Carod-Rovira and former Basque presidents José Antonio Ardanza and Juan José Ibarretxe. Other participants have included prominent civil society actors in Catalonia, such as Miriam Casals (president of Òmnium Cultural) and Carme Forcadell (president of the Catalan National Assembly). 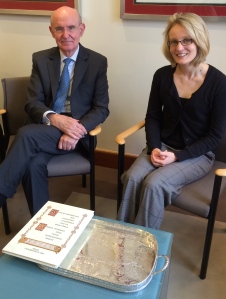 In addition to the focus on political processes, the project is looking at how different financing arrangements in Catalonia and the Basque Country have influenced debates about their relationships with Spain. While Catalonia forms part of a central-regional revenue-sharing system in Spain, the Basque region has a longstanding tradition of fiscal autonomy (as does Navarre). Under the Concierto Económico, the three Basque provincial authorities are responsible for tax collection in the autonomous community of Euskadi. Caroline has had the privilege of discussing the system with current representatives of the Treasury and Finance Department of the provincial government of Bizkaia as well as with Pedro Luis Uriarte, former CEO of BBVA and previously Basque Treasury Minister under the first Basque government (1980-1984) following Spain’s transition to democracy. Uriarte headed the Basque delegation that successfully negotiated with Madrid to restore the Concierto in 1981 to the provinces of Bizkaia and Gipuzkoa (after General Franco had abolished it in both in 1937 during the Spanish civil war) and update it for the province of Alaba.