On 21st November the University of Liverpool hosted a symposium on the Scottish and Catalan independence debates. As Scotland prepares for a referendum in September 2014 and Spain faces calls in Catalonia for a similar consultation, the two respective debates on the question of independence have acquired a fundamentally different nature. We would like to thank speakers Professor Michael Keating and Dr Andrew Dowling for addressing these differences and all the attendees for their participation in the question and answer sessions.

Professor Keating, head of the new ESRC Scottish Centre on Constitutional Change based at Edinburgh University, opened the symposium by outlining the most salient questions in the Scottish case. Why has support for independence remained remarkably stable at around 30% since 1992? How has this figure resisted change during a period in which the SNP has enjoyed tremendous electoral success, Scotland has acquired its own parliament, a majority of the population has since expressed support for enhanced autonomy for Scotland, and a fierce debate has taken place over the merits or otherwise of independence? And why does the English population seem so relaxed about the possible referendum outcome? How can we explain the relatively restrained and non-divisive nature of the independence debate in the UK in comparison with the Catalan case in Spain?

To answer these questions, Keating explained the current nation-building project in Scotland as a consequence of the historical evolution and eventual decline of the language and ideology of unionism and Britishness, which in more recent times has coincided with fundamental state transformation processes in Europe. In the main section of the presentation that follows, he discusses these developments and their effect on levels of support for the different constitutional options that Scotland faces:

Keating closed his presentation by outlining the main issues in the current referendum debate and presenting his view on the most likely outcome, as follows:

Tackling the Catalan case, Dr Andrew Dowling of Cardiff University explained how the pro-independence movement is much newer in Catalonia than in Scotland. Traditionally Catalan nationalism was pro-autonomy but not secessionist, and yet support for independence has grown very rapidly. He emphasized that it is social pressure that is currently driving the actions of political elites since the pro-independence movement is run by civic entities rather than political parties, and they have tremendous mobilisation capacity, as seen in recent demonstrations. For Dowling, the Spanish Constitutional Court’s rejection of enhancements to the Catalan regional autonomy statute in 2010 marked a turning point in Catalonia when pro-independence sentiments began to surge. The economic crisis that predated it meanwhile served to accelerate an already existing and growing sense of dissatisfaction. But these developments must be seen within the context of longer-term, structural processes. To understand where the pro-independence movement in Catalonia came from, Dowling therefore outlined political, social and economic changes from the twentieth century onwards which have contributed to the Catalans’ perceived grievances, in the main section of his presentation as follows: 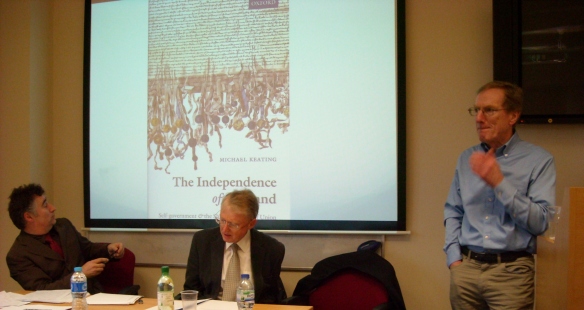